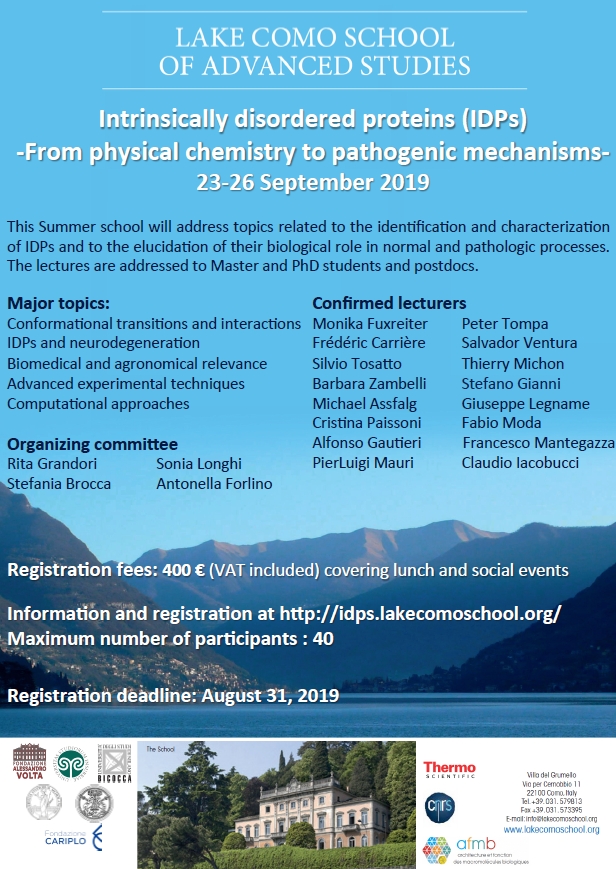 The school will address topics related to the identification, classification and characterization of intrinsically disordered proteins (IDPs) and to the elucidation of their biological role both in the norm and in pathology. Their possible applications in the field of nanotechnologies will also be tackled.

IDPs have attracted an increasing interest in the last decade because of the recognition of their involvement in numerous critical biological processes but also in various human diseases, such as cancer, neurodegenerative diseases, and infectious diseases (e.g., viral infections).

IDPs constitute as much as ~50% of the human proteome but the precise underlying relationships between disorder and biological role(s) remain elusive. Consequently, structural investigations must be coupled with analysis of function. Because of the role played by IDPs in numerous pathologies, they have emerged as potential targets for therapeutic approaches. Although drugging IDPs seems at first glance counter-intuitive, recent reports have described small molecules that act by modulating the dynamic features of disordered/flexible regions of proteins and by increasing their entropy. This has opened the way towards an entirely new branch of research. An accurate description of IDPs as conformational ensembles and the availability of theoretical frameworks to describe/predict their dynamics are however a pre-requisite for the rational design of suited therapeutic approaches. Yet, the characterization of IDPs is challenging due to their extreme heterogeneity and highly dynamic nature, and requires appropriate methods and conceptual frameworks.

Another exciting emerging theme in the field that is driving many efforts form various groups worldwide pertains the mechanisms by which IDRs can promote liquid-liquid transitions via phase separation, a process that gives rise to various membrane-less organelles within cells.

Finally, another more applied branch has emerged which relies on the use of IDPs as tools/devices in nanotechnology.